I’ve had injuries on the brain lately.  Why do they happen? My high school’s training room had a sign outside that said “Running injury? TOO MUCH, TOO FAR, TOO SOON.”  Needless to say, the trainer wasn’t very helpful.  But the medical/scientific consensus isn’t much more helpful than that.  Overuse injuries are “tissue damage that results from repetitive demand over the course of time” according to emedicine, which is a slightly less harsh wording of the same idea my high school trainer had.  But things are more complicated than that (this is going to become a theme on this blog).  It seems like the rules are always changing–mileage or workouts that were okay last year are problematic this year, or the other way around.  The topic of “why injuries happen” is way too broad to over all at once, but today I’d like to look at one small piece: the process by which damage accumulates.

Each of the various tissues in your body has its own injury threshold.  This is the amount of stress it can take before becoming injured, and it varies from person to person and from time to time.  Healthy training will increase the injury threshold of most tissue.  So a runner who has been running 50 miles a week will be able to handle a given stress (say, a 10 mile easy run) better than a runner who has only been doing 25 miles a week.  However, the higher-mileage runner is also incurring a greater stress on a day-to-day basis.  Statistically, higher-mileage runners get injured more often.  The problem is that, in most studies, “high mileage” is typically defined as 20+ or 25+ miles a week.  Most competitive runners don’t consider anything under 30 miles a week to even be “training.”  I wish I had the resources to do a large-scale study on factors that can predict running injuries.  There have been some very interesting studies, though they tend to either use a large number of serious runners and find very few conclusive results (these studies are often done via surveys) or they use a small number of recreational runners and get good results, but their applicability to serious athletes is questionable.

Here’s an example: Let’s say a study finds that recreational runners who weigh over 200 pounds have a greater risk of injury.  We might conclude “lighter is better, since it puts less stress on the body.”  But in competitive runners (particularly females), a low body mass index is associated with an increased risk of injury.

For a given runner, how does stress on the body scale? That’s what I want to answer.  What is the relative increase in injury risk for a 4, 6, 8, 10, or 12 mile run? There are three possibilities: the injury risk has a linear increase, a compounding increase, or a compounding recovery.

Compounding Recovery
According to this model, the damage incurred during a run is greatest at the beginning. 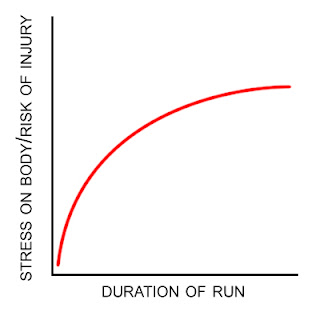 Under a compounding recovery model, the risk of injury would quickly plateau as the body got warmed up.  Additional mileage would incur a smaller marginal injury risk.

There is some logic to this idea; namely, that the muscles and tendons are not warmed up, so injuries are more likely.  This led to major establishments (running magazines, doctors, etc) encouraging athletes to always stretch before they began their run.  However, it turns out that stretching pre-run has no effect on injury risk.  Additionally, if injury risk vs. distance had a compounding recovery, we would expect mileage to have little or no effect on injury risk, at least past a certain point–once the body was warmed up, additional mileage would have little risk of incurring injury.  However, there is some epidemiological evidence to dismiss this.  In this review, one study is covered which found that runners averaging more than 40 miles per week were 2.88 times more likely to sustain an injury over a 1.5 year period. 40 miles a week is, at a minimum,  5 or 6 miles a day.  One would think that four or five miles is more than sufficient for the body to get up to speed.  But according to this study, running seven or eight miles a day incurs significantly more damage than three or four.  So out goes compounding recovery.

Linear Increase
Under a linear increase model, every step is equally damaging as the last–the stress on the body depends only on the total distance covered, and at what pace. 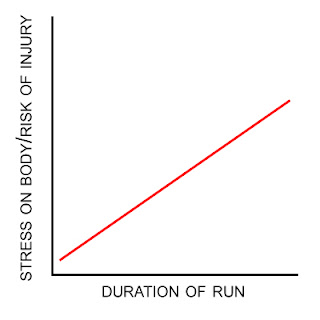 Compounding Increase
Under this model, the stress on the body and the risk of injury increase incrementally as the duration of a run increases.  This means that the last mile of a 10-mile run is more stressful on your body than the first or the fifth. 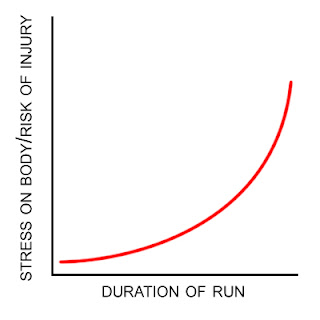 This is the model that makes the most intuitive sense to me, but as we’ve seen before, intuition and common sense can be misleading.  There is, however, some evidence that this model makes the most sense.

Biomechanically speaking, we should be able to see the effect of fatigue on the body.  If stress on the body does not increase as the duration of a run increases, kinematics (motion of the joints) and impact parameters shouldn’t change over time, and therefore damage follows the linear increase model.  But if they do, and we can link these changes to increased risk of injury, we know that stress on the body increases in a compounding fashion.

After reviewing the literature, it is fairly clear that kinematics change while fatigued.  This occurs both under metabolic fatigue (the familiar “burning” from hard anaerobic efforts and muscular/CNS fatigue (the kind that occurs during cycles of heavy training, not necessarily anaerobic), though the differences between the two are hard to discern.  Additionally, individual variability is very high when it comes to what exactly changes in the gait cycle. Some studies find no overall differences among groups of individuals, but large differences within an individual.  This makes sense–a fatigued runner with weak hip abductors (a hip external rotator) may have increased internal hip rotation, while a different fatigued runner with a weak tibialis anterior (shin muscle) may have increased ankle plantarflexion upon impact.

This highlights a weakness of simple kinematics studies–they cannot examine the underlying causes of why a joint moves differently or abnormally.  Fortunately, there is emerging research that is using electromyography and 3-dimensional accelerometers (the same thing that’s in a Wii remote) to study the way muscles act during a run. Benno Nigg’s work on tissue vibration and wavelet analysis is as fascinating as it is complicated, but today, we’re only concerned with his results: in a fatigued state (in this case, a 8-12km run to exhaustion), muscles oscillate for longer and at higher amplitudes following impact versus in an unfatigued state.

Are these muscle oscillations linked to injury? Probably.  From Benno Nigg’s earlier work, we know that the body does all it can to minimize soft tissue vibration following impact.  Unfortunately, retrospective or prospective studies on how soft tissue oscillations relate to running injury are lacking (though I’d bet they are in the work).  For now, this is a jump in logic we’ll have to accept.

So, if stress on the body indeed increases in a compounding way, what are the implications? It’s far too easy to say “well we’d better stick to lower mileage!”  It dodges the issue of maximizing potential.  The fact is, you will never reach your full potential at long distances (5k/10k) without high volume training.  What’s high volume? For a junior or senior in high school, it’s working up to at least 60 minutes a day (50-60 miles per week depending on pace).  For an upperclassman college runner, likewise for 80-90 minutes a day.

Now that I’ve made a bold statement (literally), I’ll back down from it.  It makes no sense to run 80 miles a week if you can’t stay healthy at 70.  Much of being able to handle higher mileage is a function of internal factors, mentioned at the beginning of this post.  But today’s topic is external–if you are going to run 80 miles a week, what is the least injurious way to do so?

If we accept that stress over the duration of a run is cumulative, we can draw some practical (and controversial) training recommendations:

Several of these recommendations are contingent upon the speed of recovery from runs–how long does it take to adequately recover? That’s a question we don’t have an answer to, but could provide a counter argument for my recommendation of splitting up mileage. How much better is 24 hours of recovery than 12 or 8? Anecdotal, I notice a major difference between 5 hours and 7–I prefer 8 or 9 hours between runs if I’m doubling.  But hey, what do I know?  That’s all for this time.  Sorry for the big gap between the last post and this one!