Back in August, we saw how a rehab program consisting of eccentric heel drops with a bent and straight knee reversed damage to the Achilles tendon by inducing collagen remodeling.  One thing I didn't make clear enough is that Alfredson's eccentric heel drop protocol, developed in 1998, was designed for midpoint Achilles tendonitis.  In most cases of Achilles injury, the tendon is damaged between 2 and 6 cm from the insertion point at the calcaneus (heel) bone.  But in a minority of cases, the tendon is damaged at the insertion point—right at the heel bone.  While it might seem like a trivial difference, these are actually parsed into two separate injuries.  While both are the result of damage to the collagen fibers, the surrounding tissue at the insertion of the Achilles tendon is very different from the tissue near the midpoint of the Achilles. 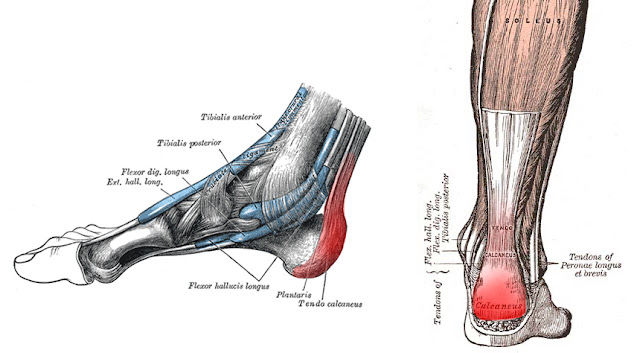 Though insertional Achilles tendonitis occurs in runners, it also occurs quite a bit in the general population, too.  This complicates studying it, because it's not clear whether you have insertional Achilles tendon issues from running.  Maybe you went too hard at the rec basketball league tournament, maybe you went on a hike with the wrong hiking pole, or maybe you're just getting old!

These finding suggest that eccentric exercises to repair tendons should be highly targeted to put a large, controlled stress on the tendon which cannot be mitigated by other muscle groups.  One key difference that Alfredson et al. highlighted was that, in a regular eccentric squat, various other muscle groups could help stabilize the knee and take some load off the patellar tendon. In a decline squat, these muscles are inhibited, forcing the quadriceps (via the pateller tendon) to do the lion's share of the work.  So, in the case of insertional Achilles tendonitis, might it be possible to alter the exercise to specifically target the insertion point of the tendon instead of the midpoint?

In a 2008 study published in the British Journal of Sports Medicine, Jonsson et al. investigated this modified version of the eccentric heel drop exercise.  The flat eccentric heel drops are done as follows: starting on the uninjured side and standing on level ground, the patient raises the heel of the uninjured leg off the ground.  All body weight is then transferred to the injured leg with the ankle in a plantar-flexed (foot pointed down) position and the knee straight.  The patient then slowly lowers the heel to the ground, then uses the uninjured leg to return to the starting position.  Unlike the exercises for midpoint Achilles tendonitis, there is no bent-leg variant for this exercise.  The flat eccentric heel drop protocol consists of three sets of fifteen repetitions done twice a day for twelve weeks.  If there is pain on both sides, the subjects in Jonsson's study used a box to get into the "up" position, avoiding any concentric contraction of the calf.  Just like all of the previous eccentric exercises we've seen, patients are encouraged to exercise into moderate pain (though instructed to stop if it becomes debilitating).  Once the exercise can be performed without pain, weight is added progressively using a backpack (illustrated at right) so the exercise is always done with mild or moderate pain.

The results from the 2008 paper, which was a small pilot study with 27 patients (34 injured tendons), were promising.  After the 12 week program, 67% were able to return to their pre-injury activity levels.  Their VAS scores (visual analogue scale, 0-100 scale of tendon pain) decreased significantly.  Unfortunately, there were some major flaws and shortcomings in the study's design.  Perhaps because this was a pilot study, there was no control group—a rather egregious scientific error, especially considering that Alfredson's research group has been fairly good about adhering to good scientific practices in the past.  Without a control group doing some sort of other rehab protocol, it's impossible to compare whether the flat eccentric heel drop program is any better than another recovery plan.  Comparing results of one study to another is crude and evokes apple-to-orange comparisons.  But because this is only a small pilot study, perhaps we can forgive this sin.

However, in a slightly baffling move, Jonsson et al. parse the study subjects into two groups: those who said they were "satisfied" with their outcome and those who said they were "not satisfied."  They then attempted to show statistically significant differences between the groups.  This move is puzzling, as it is more an investigation of injury psychology than anything else.  This might have been interesting if they could have shown that the dissatified subjects were more likely to have Haglund's deformity on the back of their heel or were older in age, for example, but they found no such associations.  In fact, the only difference between satisfied and dissatisfied subjects was their follow-up VAS score.  Patients who were satisfied with their outcome experienced (surprise!) less tendon pain than those who were not.  Finally, there were some shortcomings that limit this study's applicability to runners.  First, the subjects were recreational walkers, joggers, and casual athletes.  Second, most were over fifty years old.  Like the studies on patellar tendonitis, which usually used volleyball or basketball players due to the higher incidence of that particular injury in those sports, Jonsson's study consists mostly of subjects from the demographic which makes up most insertional Achilles tendonitis cases—moderately active middle-aged men and women.  The use of such casual subjects might hint that compliance with the assigned protocol was not spectacular.  One reason doctors and physical therapists usually love working with serious athletes is that they are much more likely to actually do the exercises they are prescribed, and hence achieve a better outcome.

Given these shortcomings, it's obvious that a larger, better-designed study should be done, I can only hope that Alfredson's research group is currently conducting one.  Despite the flaws, modifying the eccentric heel drop program in this way for insertional Achilles tendonitis is still probably a good idea.  Though I usually don't believe in jumping on the bandwagon for a new therapy or treatment after just one paper, in this case, the theoretical underpinnings are fairly sound, and the proposed change is not a radical departure from the well-established eccentric heel drop program for midpoint Achilles tendonitis.  Further, it's fairly clear that a) small changes in the way an exercise is done can have a big impact on recovery and b) the traditional eccentric heel drop off a step is not particularly effective for insertional Achilles tendonitis.

In short, the modified protocol is as follows:

Well, unless I'm forgetting something, it looks like I've done it! I've finally put out a fairly concise post on an injury! Of course, this really is more of an addendum to the Achilles tendonitis article from a few weeks ago.  In any case, look forward to some longer, more detailed posts on new subjects.  We've reached the current limits of research on progressive eccentric exercise as a rehab program for tendon injuries.  Hopefully we'll see some new articles in the next few years on creative eccentric exercises for some of the other recalcitrant tendon issues common in runners: the hamstring tendons, the smaller tendons in the foot, and some of the deep tendons in the hips.  Until then, you can look forward to more posts in the injury series from me about proven treatments for common injuries like IT band syndrome, groin pain, and many more.  There's also plenty of non-injury related issues to read and write about too.  Look for posts in the next few weeks about some of the "scientific sins" common in exercise physiology, a quick reference guide for anatomic terms of location (distal, medial, etc.), and perhaps some thoughts on training and racing as the cross country season gets rolling for high school and college athletes across the country.

So, what would you like to hear about in the future? Training? Racing? Speed? Injuries? I'd love to know.

I've been coaching runners and writing about training and injuries for over ten years. I've helped novices, NXN-caliber high schoolers, DI athletes, elite-field competitors at major marathons, and runners everywhere in between. I'm currently finishing up a PhD in human performance at Indiana University's School of Public Health, where my research is focused on the biomechanics of overuse injuries in runners.

Did you know I have a book? Check it out here!