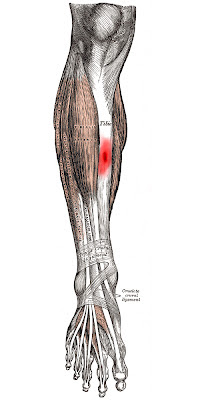 This installment of the Injury Series deals with tibial stress fractures, one of the most serious of the common running injuries.  A stress fracture, or “hairline fracture,” is a small crack in a bone that develops due to repeated stress on the bone, usually from weight-bearing activity.  Typically, a stress fracture develops gradually, as high stresses progressively overcome the bone’s ability to heal itself.  Blaming stress fractures just on high stresses is misleading, though.  In a healthy athlete, exposure to high loading and impact strengthens bones, as they remodel according to the stresses they experience in daily life.  So, all else being equal, a weight lifter or construction worker would have much stronger bones than someone confined to bed rest.
A stress fracture is a quite serious injury, and often requires at least some time spent in a “boot” or walking cast to allow the bone to recover.  Recovery is predicated on the body’s ability to heal the microtrauma to the bone, and unfortunately it is a slow process which cannot be hurried along.  How soon you’ll be able to return to running depends on the severity of your fracture.  As such, this article is more focused on preventing tibial stress fractures in the first place and understanding why they occur, since there will be no quick and easy exercise protocol to recover from a stress fracture in a few weeks.  As it turns out, the dominant factors in the development of tibial stress fracture seem to be related to “intrinsic” factors like bone structure, bone composition, and biomechanics, versus “extrinsic” factors like mileage, running surface, and so on.
Anatomy
The tibia is your “shinbone,” the long, thick bone that forms the front of your lower leg.  To date, most researchers believe that tibial stress fractures are caused by repeated bending of the tibia.  Much like a thin steel rod under a compressive load, the tibia bends slightly on impact with the ground.  Repeated loading of the tibia stimulates the body to strengthen the bone, but the bone matrix must be resorbed first, which puts the bone in a vulnerable position, since if the stress from running outpaces the body’s ability to rebuild the bone, the end result will be a stress fracture.