Given that it’s been nearly a year since the last “behind the scenes” post on this blog, and seeing as the last month has represented an awfully long break in my posting on this blog, I thought I’d write up a quick post to let you all know what I’ve been up to.  I also have some very exciting news!

The main reason I have been skirting on my blogging duties for the last month or so is because I have been preparing for my new position as Director of Education and Outreach at the Runner’s Health and Performance Institute in Leesburg, Virginia.  RUNHAPI (clever name, no?) aims to be a comprehensive injury and performance center for runners with many different services all under one roof.  Within the traditional medical system, a runner with an injury first has to make an appointment to see an orthopedist, podiatrist, or sports medicine doctor, then will get referred to a physical therapist whom he or she can see several days later, then get referred again by the PT to a chiropractor for ART or Graston, a gait analysis lab, a nutritionist, or a running store for new shoes.  This is an exceptionally inefficient model, as I’ve experienced myself several times.  Often the delay between being able to see each provider is several weeks.  RUNHAPI will provide all of these services—injury diagnostics, podiatry care, physical therapy, chiropractic, nutrition, gait analysis, performance/training advice, and even a running store—under one roof.  So, instead of waiting for a week to see a PT after your doctor’s appointment, you can just walk down the hall.

I was contacted in July by Dr. George Lane, the founder and CEO of RUNHAPI.  He flew me out for a weekend and I was very impressed with his knowledge about and passion for running.  Moving out here last week was and still is a big jump for me, a Minnesota boy through and through. Anyways, the relevant part for you, the reader, is that while I’m in a different venue and have taken on a “real” job, I’m still committed to my own writing.  I have several projects that are in development and should see the light of day in a few weeks now that I’ve gotten settled in.  Among them, injury series articles on medial tibial stress syndrome (or “shin splints”), plantar fasciitis, hamstring tears/strains, and groin injuries; some considerations on running shoes or a lack thereof; and running training for team sport athletes.  I’m also hoping to release Modern Training and Physiology, my second booklet, by the end of 2012.

I’ve also made some behind-the-scenes changes.  The most noticeable is the CAPTCHA required for comments.  While I don’t like entering these words any more than you do, it should keep my email inbox from looking like this every morning: 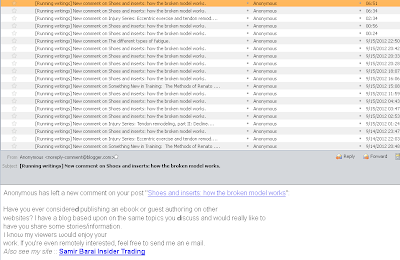 Which has unfortunately led to a few anonymous comments being missed or labeled as spam.

Thanks for staying patient in my absence! I’m looking forward to this new opportunity and others that may present themselves.  Since I’m a lot closer to many of the major running hubs on the East Coast, there may be more collaborative work on this blog in the upcoming months.  In the mean time, check out the still-very-under-construction RUHAPI website (coded by me!) and the logo/wordmark (above—designed by me!).

And lastly, if you are a doctor, chiropractor, physical therapist, or any other professional who works with runners and are interested in collaborating with or becoming a part of our project, head on over to the RUNHAPI website and send us an email!

3 thoughts on “Blog updates and some exciting news!”