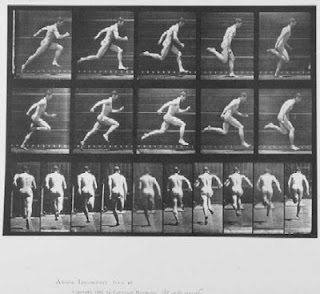 Biomechanics, as a useful science, is still in its infancy.  This might sound shocking, given that research on human gait and locomotion has been going on for well over a century (one might call Eadweard Muybridge the pioneer of “video” gait analysis), but the power of biomechanics as a useful science is still rather limited.  Science is useful not so much because it explains the world around us, but because it allows us to make predictions about the future.  While knowing how gravity works is jolly interesting (and a process we still don’t yet fully understand!), Newton’s equations changed the world because they allowed us to predict when we can see Venus, where a cannonball flies, and how long the sun will shine.  Likewise, all of this research on biomechanics is only useful if it allows us to make some predictions about the future.  Who is likely to get injured? What will happen if you change X about your running form? Is there an optimal design for footwear? Many of these types of fundamental questions remain unanswered, and because of that, we can’t really call biomechanics a “mature” field.  Fifteen years ago, the prevailing opinion in biomechanics circles was that overpronation was the root cause of many running injuries, and this risk could be mitigated by wearing running shoes which controlled and limited your pronation.  We now know that pronation is only weakly connected to a few (not many, and certainly not all) injuries, that devices intended to control pronation do not function as they ought to,1 and that the various types of shoes recommended for certain arch types or severity of pronation don’t reduce injuries like they are supposed to.2, 3
With all of this in mind, I have been pondering whether we can make some useful predictions about injuries and performance using current topics in biomechanics.  This will perhaps morph into an occasional, ongoing series of posts, but I believe I’ve developed at least one practical and novel recommendation: don’t run at night on uneven surfaces.
Why not? Here’s the logic: it’s well-documented now (and a well-covered topic on this blog) that running on surfaces of differing stiffnesses—say, concrete and grass—does NOT result in a significant change in the impact forces going into your body.  The reason for this is that your body alters the stiffness of the muscles in your leg so that the sum of the system of stiffnesses below your center of gravity remains constant.  So, if you run in soft shoes on a soft surface, your legs will be quite stiff, and likewise, if you run in thin shoes (or none at all!) on a hard surface, your legs will be less stiff.4  Much of the recent work of Benno Nigg, who is probably the most prolific and influential biomechanics researcher in the past few decades, focuses on the spring-like behavior of the muscles of the lower leg during running.  It seems that the body “tunes” the leg muscles before impact to dampen the vibrations that are sent up the leg after impact.5  As any engineer will know, to properly dampen a vibrating system, you need to properly tune your dampeners.  Your body does this by tuning the stiffness of your leg muscles before every single footstrike.
The information on how to tune your leg muscles for the next impact comes ultimately from your brain.  Using immediate feedback (i.e. the forces and impact encountered on the last footstrike), stored information in your brain, and your vision, your body calculates the proper leg stiffness.  This was demonstrated beautifully in a 1999 study by Daniel Ferris, Kailine Liang, and Claire Farley at the University of California, Berkeley. The experiment and its findings are succinctly expressed in its title: “Runners adjust leg stiffness for their first step on a new running surface.”  Ferris, Liang, and Farley used a running track with one very hard segment and one very soft one.  The researchers describe the result:

Runners decreased leg stiffness by 29% between the last step on the soft surface and the first step on the hard surface […] As a result, the vertical displacement of the center of mass during stance (~7 cm) did not change at the transition despite a reduction in surface compression from 6 cm to less than 0.25 cm. By rapidly adjusting leg stiffness, each runner made a smooth transition between surfaces so that the path of the center of mass was unaffected by the change in surface stiffness. 6

So what this means is that the brain anticipated the upcoming step onto the softer surface using both visual feedback from the eyes to gauge which step would be the first to hit the surface, and stored information in the brain about how stiff the upcoming surface is.
You can probably see where this is going: if the brain doesn’t have adequate information about upcoming surface changes, the legs will not be properly tuned for the impact, which will cause a significant disruption of normal biomechanics.
Some interesting evidence for this idea comes from an odd sector of biomechanics: total hip replacement.  Joint implants are one rare occasion in which scientists can actually measure the true forces that are transmitted inside the body.  Over the years, a few brave elderly folks who have needed a total hip replacement have volunteered to have their artificial hips augmented with force transducers and a wireless transmitter.  After having recovered from surgery, these patients will perform daily activities like walking, ascending and descending stairs, and even jogging for short distances in a laboratory to get a snapshot of what kinds of forces are going on inside the body.  By and large, these forces correlate well with the forces we measure outside of the body with force plates: walking results in forces from about 1-2x your body weight, while jogging results in forces 2-3x your body weight.  But, more relevant to the current discussion, on a few occasions, the research subjects have tripped and stumbled while in the laboratory.  Stumbling can result in forces up to eight times your body weight being transmitted across your hip.7  Why? It likely has to do with the fact that the body is encountering an impact that is drastically different than the one it prepared for.  Humorously, this is the same phenomenon you encounter when climbing stairs and you think there is “just one more stair” left when in fact, there are none.
So, back to uneven surfaces: normally, running along a rough trail or bumpy grass field is not a problem, since your eyes (and brain) identify the twists, turns, slants, and transitions that are coming up.  Your legs are properly tuned to each impact, and the net effect on your ground reaction force is marginal, if any.  However, what might happen at night, when you can’t see the natural variations in the upcoming trail? Your body will be forced to maintain its current muscle tuning state, or make guesses at what’s coming up.  You won’t be prepared for the inevitable changes in the surface, and your body will have to absorb repeated impacts your legs haven’t been tuned for.  Unlike stumbling, which is a one-time impact, careening along a dark trail in the middle of the night could result in thousands of impacts your body isn’t ready for.  This could be quite injurious!
Now, I might be a bit hypocritical here: this isn’t exactly a prediction we can ethically test in a lab.  But we might be able to detect some trends if we studied some late-night or early-morning runners who train either on trails or roads.  And, for now at least, the theoretical grounding for this recommendation is fairly sound.  Who knows, though, perhaps these principles will be overturned in fifteen years too!  But until then, if you are a midnight miler or pre-dawn runner, keep your runs on the roads or on smooth, even trails when it’s dark outside.
References
1.            Nigg, B., The Role of Impact Forces and Foot Pronation: A New Paradigm. Clinical Journal of Sports Medicine 2001,  (11), 2-9.
2.            Ryan, M. B.; Valiant, G. A.; McDonald, K.; Taunton, J. E., The effect of three different levels of footwear stability on pain outcomes in women runners: a randomised control trial. British Journal of Sports Medicine 2011, 45 (9), 715-721.
3.            Knapik, J. J.; Trone, D. W.; Swedler, D. I.; Villasenor, A.; Bullock, S. H.; Schmied, E.; Bockelman, T.; Han, P.; Jones, B. H., Injury Reduction Effectiveness of Assigning Running Shoes Based on Plantar Shape in Marine Corps Basic Training. The American Journal of Sports Medicine 2010, 38 (9), 1759-1767.
4.            Kerdok, A. E.; Beiwener, A. A.; McMahon, T. A.; Weyand, P. G.; Herr, H. M., Energetics and mechanics of human running on surfaces of different stiffnesses. Journal of Applied Physiology 2002, 92, 469-478.
5.            Friesenbichler, B.; Stirling, L. M.; Federolf, P.; Nigg, B. M., Tissue vibration in prolonged running. Journal of Biomechanics 2011, 44 (1), 116-120.
6.            Ferris, D. P.; Liang, K.; Farley, C. T., Runners adjust leg stiffness for their first step on a new running surface. Journal of Biomechanics 1999, 32, 787-794.
7.            Bergmann, G.; Graichen, F.; Rohlmann, A., Hip joint contact forces during stumbling. Langenbeck’s Archives of Surgery 2004, 389 (1), 53-59.

1 thought on “Useful predictions from biomechanics: Don’t run on uneven surfaces at night”