Skip to content
A few days ago, I received an email from my high school coach asking me about the “correct” way to calculate percentages of a given pace.  This is a question that I am asked fairly frequently, and the answer has a few interesting angles, so I have decided to make a post about the details.
Many different training programs are predicated on doing workouts, easy runs, and interval sessions at various percentages of a particular pace, whether this is race pace or threshold pace or VO2 max pace.  But if you ask a group of people how to calculate, say, 85% of 5:00 mile pace, you’ll get two different answers.  The first camp will say, “Simple, just multiply 5:00 per mile by  1.15, which gives you 5:45 per mile.”  The second will say, “No, you have to divide 5:00 by 0.85, which gives you 5:53.”  Who is correct?
In some sense, they are both correct.  To break down what each of these particular strategies actually mean, mathematically speaking, it helps to compare and contrast the result for a variety of percentages.  So, sticking with our example of 5:00 mile pace, let’s do the math on a few various paces, both faster and slower than 5min-miles.  To make things simple, let’s call one variant—85% = 5 x 1.15— the “multiplication method” and the other—85% = 5 / 0.85— the “division method.”

So, looking at the table above, we can see how the two methods break down. The multiplication method is the mathematically proper representation of percentage of PACE—for every incremental change in the percentage, the running pace, in minutes per mile, changes by a consistent amount.  Just like 90, 80, and 70% of $100 differ by $10 for each step, so too do 90, 80, and 70% of 5:00 mile pace differ by a consistent change in pace (30 seconds, in this case).
The division method is the mathematically proper representation of percentage of SPEED—if we convert 5:00 mile pace into its true speed in meters per second, we can see that the division method results in a linear change in speed(in m/s) for each incremental change in percent— 0.54 m/s in this case.
So, which is “correct”? That depends on your perspective.  From a convenience point of view, I am partial to the multiplication method,  To me, it makes a lot of sense for 110%  and 90% of race pace to be an equal difference, in pace, from the original race pace.  This is also the opinion of Renato Canova, the world-famous Italian who has coached many of the great Kenyan distance champions.  I have even taken to calling the multiplication method “Renato Canova math” to distinguish it from the division method, which you might call, in jest, “American math.”
But there might be a good physiological argument to be made for the division method.  After all, the increases in speed increments that occur with the multiplication method may lead to an unacceptable ramp-up in effort per percentage increase.  Ideally, you’d have a percentage system where linear increases in the percentage of race pace resulted in linear increases in the effort level and energy expenditure of the athlete.  I don’t have the physiology expertise to know how the math of that would work out, but it’s pretty obvious that the ramp-up in effort from 100 to 110 to 120% will be more aggressive using the multiplication method than with the division method.
In the end, the important part is not which system you choose to use.  Rather, when discussing training with athletes and coaches, it is important that you be consistent and clear with your methods! If you were reading about some of Renato Canova’s ideas on the critical importance of training at various percentages of race pace, for example, you’d get totally different paces if you used the wrong method! The difference is not so great between 90 and 110% of race pace, but at the extremes it becomes significant—over 30 seconds per mile when comparing 70% of 5:00 mile pace!  For the record, all of my writings about training on this blog and elsewhere use the multiplication method.  For all of the coaches and athletes out there, I’d like to hear your thoughts on this—how do you calculate percentages of race pace?
To close, I’ll leave you with four useful formulas (two for each method) for calculating the proper pace and percentage given a particular race pace.  While it is pretty basic to figure out the right pacegiven a particular percentage, the math can get you a bit confused when trying to figure out the percentage differencebetween two paces, especially when you aren’t sure which method you’re using! To alleviate that problem, I’ve done the algebra for you.   These formulas are particularly handy for use in spreadsheets when preparing pace charts.  Note that the dot operator ( · ) just means multiplication.
P = Percentage, in numeric form (i.e. 85, not 0.85)
Pace = desired pace to run
RP = race pace, or the “initial” pace (representing “100% of pace”)
Multiplication Method 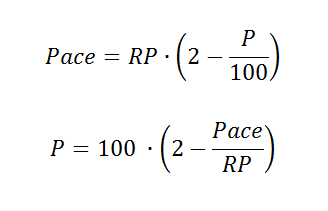 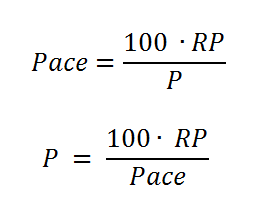