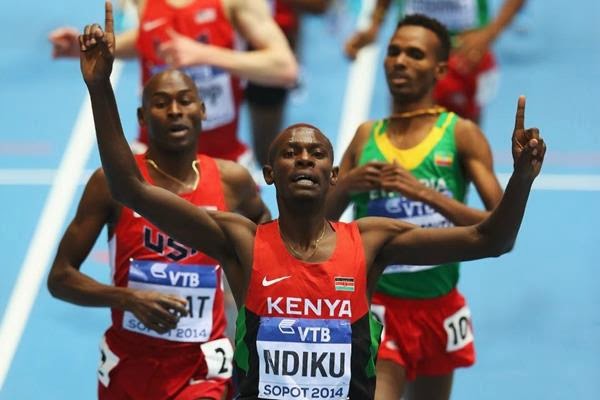 Some of the most popular posts on my blog are the articles on the training schedules and coaching philosophy of Renato Canova, arguably one of the most successful running coaches in the world.  Canova, born in Italy, rose to prominence by coaching many top Italian runners but is best-known now for his work with elite Kenyan runners.  The Olympic and World Championship medalists he has coached are too many to list concisely.  But what’s perhaps more remarkable about Renato Canova is his willingness to share the training schedules of his athletes with the rest of the world.  While other coaches keep their athletes’ schedules tightly under wraps, Canova posts them online, usually at LetsRun.com, for anyone to look at.

This article concerns the last nine weeks of the training of Caleb Ndiku in preparation for the 2014 World Indoor Championships at 3000m in March.  Ndiku, an incredibly talented 21-year-old Kenyan, secured the gold medal in a slow, tactical race with a long kick from 500m out.  As Ndiku lacked the blistering finishing speed of other top runners, Canova designed his training schedule to foster the development of a long, sustained drive to the finish.  The strategy worked out brilliantly, as Ndiku covered the last 1000m in under 2:22—28.4 second 200 pace!
If you haven’t read anything about Renato Canova’s training philosophy, you can use my article, “Something New in Training: The Methods of Renato Canova,” as a helpful introduction.
Another good companion article is Preparing for Championship Races with Renato Canova, an article of mine which reviewed the preparations of Sylvia Kibet, Silas Kiplagat, Imane Merga, and Thomas Longosiwa before the 2011 World Championships in Daegu.  You will see many similarities between those schedules and the training of Caleb Ndiku. I have also analyzed Canova’s marathon training schedules for those who are interested.
A Brief Note on Percentages
Most workouts in a Renato Canova training schedule are prescribed using percentages of race pace.  Canova does the math a little different than an American might.  Percentages are always expressed as fractional deviations from the original pace—so to take 90% of 5:00 mile pace, Canova (and I when figuring out the paces of these workouts) would do 5 * 1.1 = 5.5 or 5:30 per mile, not 5 / 0.9 to get 5:33 per mile. All percentages portrayed in the schedule are calculated using this method.
Disclaimer
As usual, I need to caution that these interpretations are wholly my own.  I’m not Renato Canova, so I can’t guarantee that my analysis is correct.  So take what I say with a grain of salt.  With this schedule in particular, I had to make a lot of educated guesses, as I can’t compare it to a similar schedule from another athlete preparing for the same race as I could with the other Canova schedules I analyzed.  Because of this, it’s hard to distinguish what might be an idiosyncratic workout that plays to a unique strength of Ndiku, or something that is a part of the general Canova plan.  I also take responsibility for any typos or mistakes, of which there are sure to be at least one or two.
The Training Schedule
Caleb Ndiku’s last nine weeks of training are available as a .pdf here.  The paces of his workouts are provided both in actual pace/splits and as percentages of 3k and 5k pace.  I used Ndiku’s 3k performance of 7:38 in Düsseldorf as a basis for the 3k pacing, and a converted value (7:38 → 13:18) for his 5k fitness.

You will notice a ~4 week gap in the workouts around when Ndiku traveled to Europe to race.  Canova did not provide Ndiku’s schedule during this period, so unfortunately I had to leave it blank. The schedule itself is sized to 17″x11″ paper but can be easily printed at 11″x8.5″, albeit in a pretty small font.