This week, Twin Cities in Motion announced that the 2015 edition of the Twin Cities 1 Mile will be run on a new course heading north on Hennepin Avenue through downtown Minneapolis, instead of the historic course down Nicollet Mall.  The motivation for this change was construction of a new light rail line that crosses the Mall, with trains that run every few minutes—far too frequent to be able to get a full wave of runners across quickly.
The old course was flat and very fast, and with its very generous prize purse, the elite wave attracted several extremely fast milers.  Because of stormy weather, the race was canceled at the last minute in 2014, but in 2013, Nick Willis set a course record of 3:56.1 in 2013 for a cool $10,000 bonus, and five other runners broke four minutes.
A new course, but the same record
In a recent interview with Minnesota running blog Down the Backstretch, TC 1 Mile race director Jeff Decker clarified that, even though the course has changed, Willis’ 3:56 (and Sara Hall’s 4:30.8, run in 2011) are still considered the “event records,” so to earn the $10,000 record bonus, these are still the marks a runner would need to hit.
Which brings us to the new course.  The new route up Hennepin Avenue has no turns to mention, but it does have a noticeable uphill in the first half mile or so.  Down the Backstretch provided a handy chart comparing the elevation profile of the old and the new course.  Can we use this to predict whether the course will be faster or slower, and what kind of performance would be necessary to break a course record?
In fact, we can, as long as we make a few simplifications.  If we can make an idealized model of each course, we can compare their relative “fastness.”  As you can see in the chart above, the old course fluctuates a bit, but never gains nor loses more than ten feet.  Because of this, I’m comfortable treating the old course as if it were perfectly flat, i.e. no significant differences from an idealized “fast as possible” course. 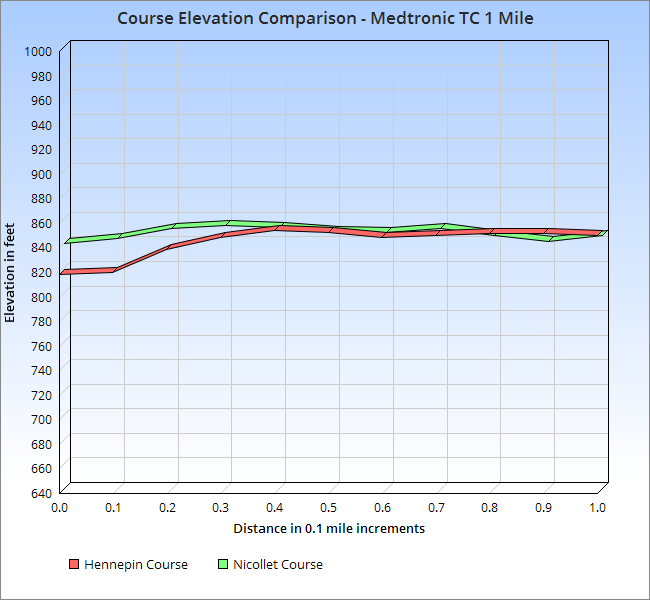 The new course gains 30 feet of elevation over the first 0.4 miles, moving from 820 to approximately 850 feet above sea level in the first 640 meters.  After this, it’s essentially flat.  We can make a simplified version of the course that gains 30 feet over 0.4 miles at a consistent incline, and is completely flat thereafter.  So, the question then becomes, “How much does a 30 foot gain over 0.4 miles slow down a runner?”

Calculating the losses from uphill running
There are two ways to calculate this, each forwarded by a prominent coaching figure.
Jack Daniels, of Daniels’ Running Formulafame, has stated that research he conducted showed that, for every percent of hill gradient (a unit used to measure hill steepness, expressed in %), you are slowed by 12-15 seconds per mile.  A gain of 30 feet over 0.4 miles is a gradient of 1.4%, so crunching the numbers, we get (12 to 15)  * 0.4* 1.4 = 6.7 to 8.4 seconds slower.  As the rest of the course is completely flat, the other 0.6 miles of the course have no influence on time.
The other, simpler method comes from internet coaching guru John Kellogg, of LetsRun.com fame.  Kellogg, who is reputed to have an uncannily accurate  ability to estimate the effects of hills or wind on the speed of a course, states that every ten feet of vertical gain will result in being slowed by 1.74 seconds, regardless of the horizontal distance covered.  In our case, we gain 30 vertical feet, so we expect the race to be slowed by 1.74 * 3 = 5.2 seconds.
Now, there are some caveats to both of these estimates.  Both Kellogg and Daniels admit that their calculations are based on data from submaximal running, i.e. speeds slower than VO2 max (about 3k-5k pace).  This is because these experiments are very simple to do: you can just have a group of runners do several short bouts on a treadmill set at various inclines, and measure the change in oxygen intake as the incline gets steeper.  However, as anyone who has done a hill workout knows, running fast up a hill rapidly demands a lot more energy than running on the flat.  Once you’ve hit your VO2 max, it’s not possible to measure your energy expenditure through analyzing the gasses in your breath anymore, since any additional increase comes from your body’s anaerobic system.
To accurately measure energy expenditure at high speeds (like, say, four-minute mile pace), it would take a much more complicated experimental setup.  Your best bet would be to correlate blood lactate levels on a range of inclines and at various speeds with blood lactate level measurements taken at the same speed, but with no incline.  Another possible avenue would be a direct estimate of the work done and the power expended at each joint, which could be done with a 3D gait laboratory.  Good luck herding a dozen four-minute milers into one of those!
Further muddying the picture is the likely fact that some runners are better at handling inclines than others.  There hasn’t been any research into this that I’m aware of, so it’s hard to say how big the differences could be.  Confidence intervals from Daniels’ experiments could give a rough idea, but I haven’t seen the original data.
Considering these restrictions, plus the assumptions we made in our “idealizing” the courses, how much can we trust these numbers? That’s very much up for debate, but in keeping with the proud tradition of hand-waving in scientific estimates, I’m willing to negotiate away to one “sig fig” (significant figure) and use John Kellogg’s rule as a lower bound, and the high end of Jack Daniels’ rule as an upper bound.  This leaves us with a figure of 5 to 8 seconds.
My prediction
After a bit of back-of-the-envelope math, we can state the following with some confidence:
The 2015 Twin Cities 1 Mile will be 5-8 seconds slower than previous years, and it is very unlikely that Nick Willis’ event record will be broken.
For Willis’ mark of 3:56.1 to be beaten, our figures suggest it would take a 3:51-3:48 effort to equal that time on the old course.  This would be an incredible (though not impossible) road mile! Sara Hall’s record would require a 4:26-4:23 effort.
Indeed, our numbers suggest that Willis’ run last year would not even be sub-four minutes on the new course.  It seems likely that the winner might only run 4:01 or 4:02 on the new course.  This would be rather disappointing, since being able to see a sub-four mile is still something pretty special, especially to people who aren’t fans of running, and just happen to be walking down Hennepin Avenue on a weekday.  A sub-four mile is enough to get anybody excited about running.  The six I witnessed at the 2013 TC Mile are still the only sub-four miles I’ve ever seen in person.
I’d love nothing more than to be proven wrong.  After the race, maybe I’ll even be able to run the numbers and see if a statistical analysis of the results supports this prediction.  But if the race management is worried about times being too slow, there’s an easy solution.  Run the course the other way! If that’s not an option, you can always hope for a tailwind…
The Twin Cities 1 Mile takes place on May 14th in Minneapolis.  I’ll update this article, or post a follow-up, afterwards.