The table above presents the result of all seven conversion methods I developed.  By visual inspection, and by plugging in different race times, you can see that their results are all very similar and the margin of error is relatively small.
Discussion and limitations
All in all, it was fairly surprising to me how well the final results from the seven different statistical models agreed with each other.  Every conversion gives a time which within the confidence intervals of all of the other conversions, and the lengths of the confidence intervals themselves are fairly short.
The one major downside to this type of analysis is that it does tell is what about the course actually caused the ~10 second slowdown from 2013 to 2015.  It’s a very good bet the 30-foot elevation gain from start to finish played a major role, but some people might argue that the weather had a major impact.  True, it was raining, and the temperature was not ideal, but it was actually colder in 2013! Race-time temperature was 48 degrees in 2013 compared to 54 degrees this year.  You might be able to negotiate and hand-wave your way to chalking up about 2-3 seconds of the slowdown to the rain this year, but not much more than that.
You can play around with the conversion factors to your heart’s content, and I won’t bore you with lengthy tables comparing dozens of equivalent performances.  Instead, to illustrate how well all of these models come together, I’ll present a forest plot that shows what a 4:00.0 in 2013 would be equivalent to on the 2015 course.  After seeing this, you can understand why nobody came close to a sub-four mile! Heath’s 4:08.3 from this year converts to almost exactly the same time he ran last year—the linear regression multiplier conversion pegs his performance this year as equal to 3:57.9 (plus or minus 2.2 seconds), and his actual time last year was 3:57.1.  Not bad! 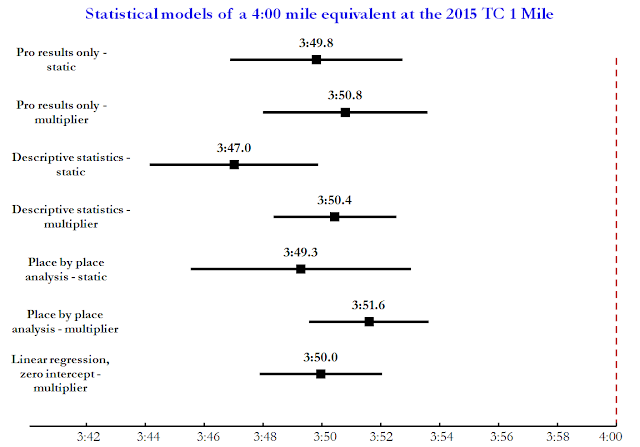 Conclusion: A new course?
For competitive runners, this year’s Twin Cities 1 Mile was about 10-12 seconds slower than the previous course.  Some of this could be explained by the rainy conditions, but temperatures were not substantially different between 2013 and 2015, so the uphill route remains as the best explanation for the slowdown in times.  In February, I predicted a 5-8 second slowdown based on data from submaximal treadmill tests.  If anything, I actually underestimated how slow the course would be by a few seconds! Chalk that up to the rain, I suppose.  So far, I’ve resisted the urge to say “I told you so,” but…well, there, I said it. If you’re a race director, I’m available for consulting…
Even in perfect conditions, it will remain extremely difficult to run fast times on the new TC 1 Mile course.  This is very unfortunate, as it was a very special opportunity for elite runners to be in the local spotlight.  Additionally, breaking the still-standing course records will be nigh impossible.  This will detract from the ability of Twin Cities in Motion to recruit top-flight runners, given that the $10,000 bonus for a course record is out of reach.  Heath’s converted time is within a second of Willis’ course record, and women’s pro winner Heather Kampf’s converted time was only three seconds off Sara Hall’s record from 2011.  Finally, we shouldn’t underestimate the marketing potential of being able to see a four-minute mile in person.  People in the general population are only vaguely aware that it is possible for a handful of humans to complete that task—imagine strolling along Hennepin Avenue on a Thursday evening, only to discover that four or five men are about to run one before your very eyes!
This is not to say that Twin Cities in Motion did a bad job.  I ran in the race this year, and TCM did an excellent job with every aspect of the event.  It was a great race and I’d love to do it again.  I do with they’d change the course, though! Given that the new light rail schedule puts the old course permanently off-limits, selecting a new course is in order.  There are a few critical criteria: the course has to start and finish in an area that can accomodate a few thousand people, have space at the start for a staging area with port-a-potties, registration tents, and it must be as flat as possible and should have very few turns.  For competitive professional races, the course must not have a net elevation gain of more than ten feet.
To prevent absurdly fast times, the course should not be a significant net downhill either, though drops of up to about twenty feet are permissible (as a rough rule of thumb, a downhill will speed you up by about 2/3 the amount that an equivalent uphill would slow you; by this rule, if this year’s race were simply reversed, times would be about 7-ish seconds faster than 2013).
There are a lot of good locations in Minneapolis that could play host to a road mile.  If TCM wants the race to be through downtown, it should be easy to set up a course heading southeast or northwest, perhaps along Washington Avenue or 6th Street.  These streets run parallel to the light rail tracks so that should be not an issue.  My own humble suggestion is to consider running the race through the heart of Uptown.  A course starting and/or finishing near Calhoun Square would be a great “tour” of the uptown area, and there are plenty of bars and restaurants to host post-race festivities.  The Uptown area plays host to several road races, but all of them just go along Lake Calhoun—none actually run on the streets!
At the very least, if TCM does not move the course next year, they should start over with a new course record.  According to the statistical models developed above, breaking Nick Willis and Sara Hall’s records would take the equivalent of a 3:46 and 4:20 mile effort on flat ground.  We can be fairly certain that’snot going to happen anytime soon.