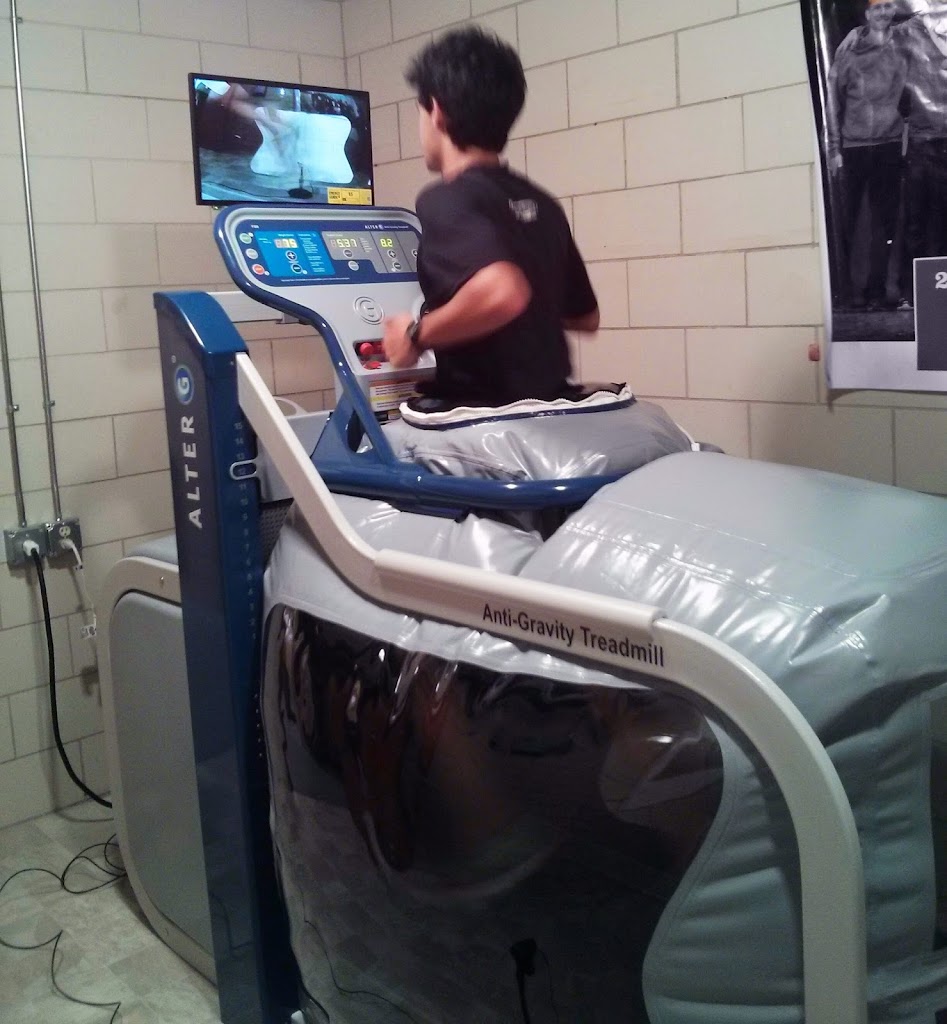 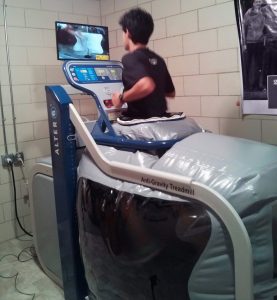 Have you ever run on an AlterG? Once firmly in the realm of space-age gadgetry only available to professional athletes, AlterG anti-gravity treadmills seem to be cropping up everywhere nowadays.  College athletic departments, physical therapy offices, and even the occasional high school are purchasing AlterGs for their widely lauded ability to allow runners and other athletes to continue to train pain-free even with significant injuries.  By reducing your effective body weight, the AlterG allows you to run at normal training speeds with drastically reduced impact and active forces.  With careful modulation of the body weight settings, you can often maintain running fitness even during the rehab period of formerly season-ending injuries like a stress fracture.

The AlterG achieves its anti-gravity effects using a pressurized “bubble” that encapsulates the runner’s lower body.  Special compression shorts with an airtight skirt zip securely into a thick vinyl bubble that surrounds a standard running treadmill.  The heart of the AlterG, a computer-controlled air pump, inflates the bubble to above atmospheric pressure, applying an evenly-distributed force from air pressure to the runner which counters the force of gravity.  By adjusting the air pressure inside the bubble, the AlterG can adjust your effective body weight. The AlterG uses a force plate to correlate changes in the bubble’s internal air pressure and your effective weight while standing on the treadmill.
In the past few months, I’ve been fortunate enough to have access to an AlterG.  I’ve also been fortunate to not have to use it for any injuries (knock on wood…), so I used the opportunity to look into a question that I’ve been wondering since learning about the AlterG: How much easier is running on an anti-gravity treadmill compared with running on land?
Because the majority of the metabolic cost of running comes from absorbing impact and accelerating your body weight against the force of gravity to propel yourself forward, it’s axiomatic that reducing your effective body weight while maintaining the same running speed will reduce the energetic cost of running.
Notably, this is not the same situation that occurs when a runner loses weight normally—if a 150 lb runner decreases his weight to 140 lbs by restricting his caloric intake, muscle loss is inevitable (this is part of the problem with the idea of “racing weight”).  Though he now weighs less, and thus the energetic cost of running a given speed is decreased, he has also lost some muscle, so his ability to produce energy is reduced as well.
There’s no good bio-energetic equation to predict the metabolic cost of running; the only way to get a good answer would be with an experiment, which I set out to conduct.
Methods
Now, this isn’t a real scientific study with a large number of participants and advanced statistical models.  The only subject I had access to was myself, so this was an experiment of one.  There is almost surely some degree of individual variation in the metabolic cost of running at reduced body weight, and I didn’t have access to a high-tech physiology lab either.  Neither of these are a big issue, though, since all we’re really looking for is a rough picture of the overall trend.
To get a full picture of how the metabolic cost of running changes over a range of effective body weights, I needed to collect data at different speeds and different body weights.  To estimate metabolic cost, I would have to use heart rate monitoring, the only objective measurement available to me.  With the help of a friend who is studying exercise physiology at the University of Minnesota, I planned out a progressive treadmill test that would allow me to record my average heart rate at paces ranging from ten-minute mile pace all the way down to five-minute mile pace, increasing speeds in small increments to collect more data.  The protocol is reproduced in the table below.
I carried out this treadmill test three times, at 60%, 80%, and 100% of my effective body weight on the AlterG.  During the tests, I recorded my heart rate (as measured by a Polar chest strap / watch Heart Rate Monitor

Ultimately, you will have to use pain, or lack thereof, as the primary guide for what speeds and body weight percentages are acceptable for an injured athlete when running on the AlterG.
Conclusion
Heart rate monitoring can be used to create a mathematical model which describes equivalent metabolic efforts for running at different combinations of speed and relative body weight on an AlterG anti-gravity treadmill.  This model can be useful when trying to determine appropriate training paces while running at reduced body weight, but it does not describe the variance in impact and active forces along the continuum of speed and relative body weight.  Future research using data from force plates or tibial accelerometry will be necessary to describe that relationship.  More precise data on the metabolic cost of running could also be collected using respiratory exchange ratios instead of heart rate.

4 thoughts on “How much easier is running on an AlterG? Developing equal-intensity curves for anti-gravity treadmill running”