Welcome to our special coverage of the “World’s Fastest Marathon” presented by Johnson & Johnson, I’m host Tim Hutchings here with co-commentator Stuart Storey, broadcasting live from beautiful Atlantic City, New Jersey.  Conditions could hardly be better—as we approach our 8 p.m. start time, the temperature has sunk to a chilly 36° Fahrenheit, and there’s hardly a ruffle of wind blowing off the ocean.  Runners from the 10k community race held earlier tonight are touring the newly-revitalized Revel Resort, enjoying the post-race entertainment and placing their bets on the outcome of the upcoming professional races.
Floodlights illuminate the ten-kilometer loop course, which the competitors will run criterium-style—four laps for the full marathon distance.
The start of our men’s race is only a few moments away; the women’s field will start two minutes later.  The men’s pacers will look to hit halfway in sixty-one minutes flat, and the women have asked for just over sixty-seven minutes at the half.  The goal for both races: the fastest marathon in history…
Does this sound like an impossible dream? Well, read on, and let me convince you.
We are currently living in a golden age of marathon running.  Paul Tergat’s 2003 world record has been bested forty-one times in barely twelve years—an unprecedented occurrence, especially considering that top marathoners typically only race one or two marathons per year.  Performances that, only a decade ago, would be earth-shattering are now relegated to also-ran status.
There are a number of reasons why elite marathon times are routinely three to four minutes faster than a decade or two ago: more young, talented runners are moving to the marathon in their prime running years; prize money and appearance fees have never been higher at big-city marathons; track 10,000m events are rare and not profitable to run anymore; and top African runners and their coaches have discovered new training methods that push the body to find new sources of energy, creating a breed of what coach Renato Canova calls “turbo-diesel” runners. 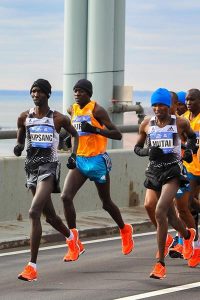 The relative importance of each of these explanations for the current banner crop of sub-2:05 marathoners is up for debate, but analyzing these is not my goal today.  Instead, I want to outline how current champions can go even faster.
It doesn’t involve drugs, and it doesn’t involve any changes in training.  Instead, making a number of alterations to the actual marathon event itself should do the trick.  Modern marathons are still conducted according to the logistical needs of a big-city event that caters to the general population, and sometimes, this doesn’t result in ideal circumstances for running as fast as possible.
Attempts at distance world records on the track are planned months in advance: the entire field consists of world-class runners, expert pacers are enlisted to ensure the pace is spot-on, and the venue is selected only after careful consideration of things like temperature, wind, and quality of the running surface.  In the future, marathon world record attempts will look very similar.
Big-city marathons that have played host to world record attempts, like Berlin, London, and Rotterdam, still have a number of deficiencies which could be costing elite marathoners precious seconds over the course of the race.

Time of Day
First among these is start time of the race.  Virtually all marathons start early in the morning; this is for weather-related reasons (temperatures and wind are lower in the morning), but also for convenience and safety for general participants.  A marathon that started at six in the evening would still have back-of-the-pack finishers coming in at midnight, so a morning start is a no-brainer for a mass participation event.  From a peak performance standpoint, though, this is suboptimal.

A huge raft of research shows that performance in endurance exercise peaks in the evening, not the morning.  For example, a 1983 study by Baxter and Reilly demonstrated that performance in 100m and 400m freestyle swimming shows a consistent, inverse linear relationship between time of day and swim performance.1  Performance at 400m (about equivalent to a 1600m run, duration-wise) was 2.5% better at 10 p.m. versus 6:30 a.m.  As the authors concluded, early morning was clearly the worst time to schedule an all-out endurance test!

A lot of coaches and athletes have figured this out already—the fastest heats of the 5k and 10k at meets like Mount SAC Relays and Stanford Invite, where numerous NCAA and American records have been set, are always late at night.  And most high school and college runners have figured out that tough interval sessions seem harder when they’re done at Saturday morning practice instead of at a typical weekday afternoon practice.
There are a few counterpoints to consider.  Some emerging research suggests that genetics plays a role in whether you are a “morning person” or an “evening person,” which in turn affects your performance in morning versus evening endurance events.  It’s unclear whether this is merely a relative effect (i.e. their morning performace does not suffer as much), or whether some people really are at their best in the early morning.  Still, a 2015 review of the current state of the science by researchers at the University of Bergen in Norway concluded that athletic performance is best in the evening.2
Some top Kenyan and Ethiopian runners might have morning-type genotypes, and thus would either be unaffected or negatively affected by evening marathon races.  Top runners might also not be as affected by time of day as the teenage swimmers in Baxter and Reilly’s study.  Nevertheless, some top runners are surely evening types, and top talent can’t circumvent all barriers.  Altitude, for example, allegedly affects Kenyans and Ethiopians to a lesser extent than Western runners, but they still can’t run their absolute best unless they are at sea level.
The ideal elite marathon would start somewhere between 6 p.m. and 10 p.m.  This would let elite runners take advantage of the circadian variation in performance, instead of fighting it by racing hard in the morning.  Obviously, training would need to be changed, too—tough marathon-specific workouts would need to be performed in the evening during the buildup to the race.
Adjusting to jet lag
While we’re considering the effects of the circadian rhythm on running performance, it’s worth pointing out that Kenya and Ethiopia are eight hours ahead of Eastern Time.  For a marathon race in the United States, traveling such a great distance will induce serious jet-lag which can affect performance for several days.  According to Thun et al., westward travel induces deleterious effects on athletic performance for at least half a day per timezone, though there’s considerable individual variability.2  If our world record attempt was to occur in the United States, this suggests that athletes from Europe and East Africa should arrive at least a week beforehand to be totally recovered from travel and jet lag before the race.
Course layout
The two enemies to running fast on the roads are hills and turns.  All world-record caliber courses today are very flat, but a number of them still have a lot of turns.  This is a necessity in old cities with haphazardly-planned streets dating back hundreds of years, and multi-loop courses are out of the question for general participation events—elites would lap too many slow runners.  Dubai is the only major marathon that’s planned a course that largely avoids turns; their race is essentially an out-and-back with two hairpin turns.

An easy way to best this is to use a criterium-style loop course.  Holding a marathon over a 4×10 km course makes it vastly easier to choose a perfectly flat route without excessive turns.  However, this necessitates that the event be an elite-only competition.  The United States Olympic Team Trials in the marathon followed a similar design in 2008, with the field covering four 10 km loops.  A loop of this length also has the advantage of being just long enough so that the fastest men (~2:02 marathon pace) would not catch up to the slowest elite women (~2:30 marathon pace), assuming the women started a couple of minutes after the men.

Atlantic City is most famous for the boardwalk, but the  race itself should not run along it.  It could be uneven, and the springiness of the boardwalk might slow down the runners.  Theoretically, it’s possible to design a surface such that its rebound properties speed you up slightly compared to a super-stiff surface like concrete or asphalt, but it’s fiendishly difficult—it depends both on the speed you’re running, and the individual stiffness of your legs, which is not the same, even for, say, all 5’11, 135 lb runners moving at 4:45 mile pace.  Further, this might set a bad precedent—future marathons might just be run on a track, or a track-like surface poured on top of a road.  The IAAF would probably rule that record-eligible marathons must be run primarily on asphalt or concrete anyways.