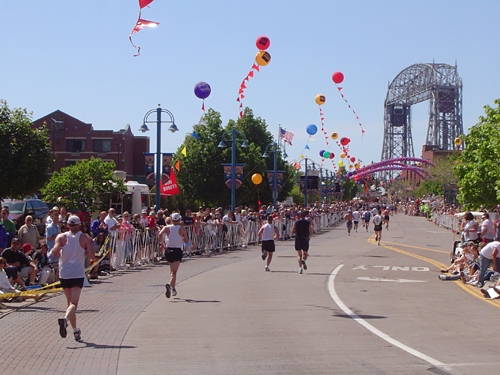 The 40th annual Grandma’s Marathon was held this past weekend in Duluth, Minnesota.  Grandma’s is a staple of the Midwest marathon scene and is perennially praised as one of the best races in America.  The point-to-point course is a beautiful route that starts in the north woods of Two Harbors and follows the shore of Lake Superior into downtown Duluth.  With a slight net elevation loss and very few hills, the course is also usually a fast one.

This year, however, many participants were disappointed with their times.  Warmer than average temperatures and clear, sunny skies caused many runners to finish well back from their goals.  Since several runners that I coach or advise ran the race, I was curious to see how much of an effect the temperature had on their finish times.  So, as I often do, I started crunching some data.
Fortunately, I was able to stand on the shoulders of some Big Running Data giants—a 2012 scientific paper by Nour El Helou and other researchers in Francealready laid the groundwork for disentangling the effects of climate on marathon race times.  In their paper, El Helou et al. analyzed ten years’ worth of results from six World Marathon Majors (London, Berlin, Paris, Boston, Chicago, and New York), resulting in a data set of 60 marathons.  These totaled almost 1.8 million marathon finishers.  El Helou et al. ran statistical analysis on each year’s results, trying to find the correlation between ambient temperature during the race and the distribution of the finish times.
El Helou et al.’s methods
Because El Helou et al. (correctly) hypothesized that temperature would have varying effects on runners of different abilities, they analyzed several levels of performance for the top one, 25th, 50th, and 75th percentiles of male and female finishers.  So, for example, if the 2010 Chicago Marathon had 21,000 male finishers, the authors looked at the finish time for 210th place—that’s the “one percentile” time.  This marker is more useful than looking at the winning time or 10th place, because those can be affected by things like the quality of the elite field, the tactics employed by the lead pack, and so on.  After extracting the various levels of performance for the 60 marathons in the data set, El Helou et al. then consulted meteorological records to find the ambient temperature midway through each of the 60 races.
Doing regression analysis allowed El Helou et al. to correlate the ambient temperature with the distribution of finish times.  The broad trend in the results was not surprising: marathon times are slower when temperatures are too hot, and they are also slower when temperatures are too cold.  What was surprising, at least to me, was the optimal temperature for marathoning.  El Helou et al.’s data robustly shows that the ideal temperature for running a marathon is pretty chilly—39 degrees Fahrenheit (3.8° C) for a 2:40 marathon! Race times follow a parabolic curve, slowing significantly on either end of an optimal temperature.

Note that changes in a, the first constant in the formula, appear to be proportional to the square of your running speed.  b and cappear to follow linear trends.
I was trained as a chemist.  In chemistry, we have a rule: “If it doesn’t look linear, don’t do a linear fit!” As such, I used a quadratic fit for changes in the constant a.  This area of math is interesting and perplexing to me—is this model of smooth continuous parabola shape change really accurate? You’d need a lot more data to validate this.  It would be a cool project, but would be extremely time-intensive.
In any case *waving hands*, let’s just assume it is.
This allows for a general formula that gives you the equation of the race time parabola for a particular goal marathon pace.  From the linear graph earlier, we already know the optimal temperature for any given marathon pace, so it’s easy to double-check our general formula by plugging in a known marathon time and seeing where the peak of the parabola ends up.  There are, of course, some small differences because of rounding errors and the fact that this data is empirically derived.
Finally, we can create a master formula that can predict your actual marathon time based on the temperature during the race and your optimal marathon performance in ideal conditions.  This allows you to work backwards too, answering questions like “If I ran 3:06:00 in 66 degree weather, what could I run in 55 degree weather?” (answer: 3:00:27).
There are some major limitations to the model, though.  It’s clearly not valid for times under about 2:30:00, since the predictions start to fall apart.  As you approach elite men’s times, the model starts to predict faster times for hotter temperatures.  This is probably a result of the assumptions made and the limited data available when deriving the general formula to predict the trend in the shape of the parabola describing the relationship between race time and temperature: El Helou et al.’s data only extends down to 2:41 marathoners.  Extrapolating 30 or 40 minutes faster than that lands you in uncharted and inaccurate territory. More data analysis is needed to refine the model so it can be used for elite marathon times, too.  I’m also not comfortable using the model for women running under about three hours, because of the aforementioned issue with the top one percentile of female finishers.  I’ll have a better idea of what’s going on there once I finish my own analysis of top female times at other races and confirm or refute my surface area/body mass hypothesis.
Despite this, the formula proves immensely useful and quite accurate for the 2:30 to 4:00 marathon crowd.  Unfortunately for you, the generalized version of the formula is only currently workable in a very messy Excel chart on my computer.  Someday, I hope to develop a simple web app that I can embed in this article that allows you to play with the numbers in an easy, interactive way.  But that would require dusting off my JavaScript programming skills, which seems like a low priority right now.  If you really want to sink your teeth into this, email me and I’ll send you the raw data.

3 thoughts on “Grandma’s Marathon 2016: How much did the heat slow your time? A statistical analysis”