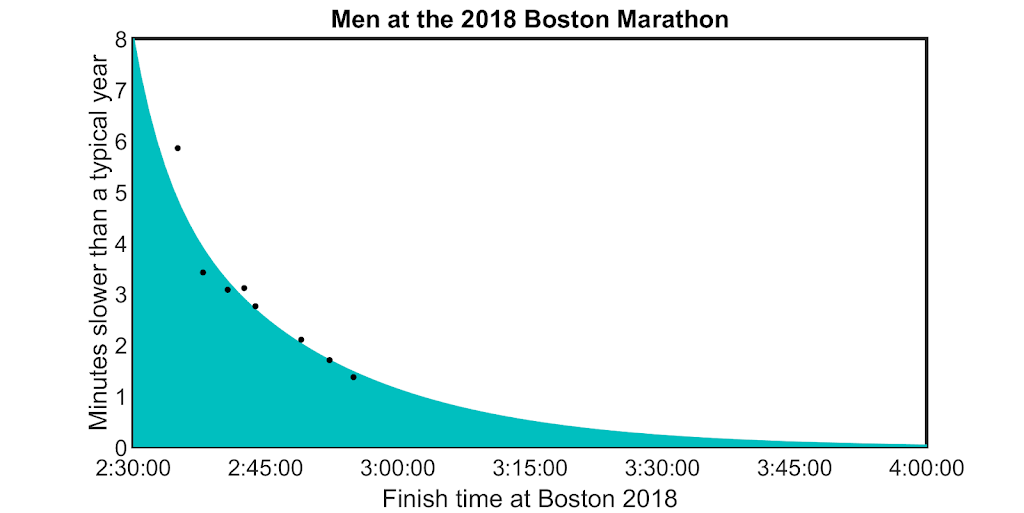 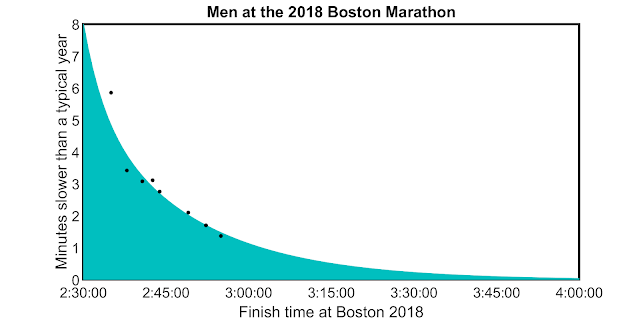 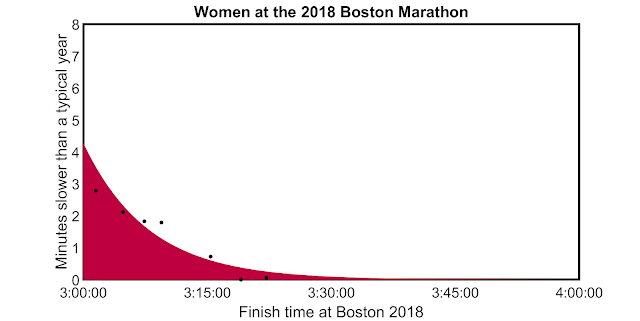 After this year’s incredibly windy and rainy Boston Marathon, I was curious to find out how much slower the race was. I’ve published analyses of courses and conditions in the past, such as with the infamously hot Grandma’s Marathon in 2016, and when I (correctly!) predicted that the new course for the Twin Cities Mile would be too slow to see a sub-four mile in 2015. However, in both of these cases, the environmental factors affecting race times were amenable to precise scientific study: the physiological effects of heat on running performance are well-known and can be examined in a controlled environment; ditto for the effects of elevation.  I’ve even got standardized formulas that I use when analyzing a road race course for my coaching clients that can accurately predict how fast or how slow each mile of a marathon will be, based on its elevation gain and drop.

With this year’s Boston Marathon, the situation was different. The reason for the slow performances was a combination of stiff, gusting wind, cold temperatures, and rain.  Even the elites kept warm running gear on for most or all of the race.  None of these things can be easily studied in a rigorous way, and even if they could, it’d be impossible to actually measure how “exposed” the athletes in the race were to these environmental factors as a function of time.

Instead, I chose to use a statistical approach.  The Boston Marathon is run on the same course every year, so previous years can be used as a control.  I chose to use the results from three years of fairly good weather at the Boston Marathon: 2016, 2014, and 2013.  The temperature at the finish line when the men’s winner crossed the line was between 64 and 61 degrees F for all three of these years, and the weather was amenable to good performance. In contrast, 2017 was too hot for optimal marathon performance, and 2015 was rainy and windy as well.  I sampled the finish time for the 10th, 20th, 50th, 100th, 150th, 200th, 250th, 500th, and 1000th place finishers in each of these years, for both men and women, and compared these to the finish times for the same places for men and women in 2018.

It looked like an exponential decay curve best-describes the trends: the slower you ran, the less-affected your time was by the weather.  The actual data points are in black in the figure above; the exponential decay function that I fitted to the data is shown in color.  These plots allow you to quickly figure out how much slower you ran at Boston this year, compared to an equivalent performance on the same course in ideal conditions.

Put simply, the statistical model collapses for times below these thresholds.  There just aren’t enough people who run this fast to get a consistent sample of the expected finish for a 2:20 marathon at Boston for men, or a 2:50 for women.  Truly elite performances start to get affected by things like the depth of the field and the tactics of how the race played out, so I didn’t want to extrapolate the model beyond its capabilities.

Why were slower runners not affected as severely by the weather?

From a purely physics-based perspective, this makes sense: air resistance is proportional to the square of your velocity, so a faster runner is going to be affected to a much greater extent by a stiff headwind. Slower runners may have had the benefit of more “shielding” from runners around them, leading to less of an effective headwind. The temperature in Boston also climbed steadily throughout the day, so slower runners had the benefit of warmer temperatures later in the race.

Why were women more severely affected by the weather?

I think this has to do with the temperature.  Women, as a whole, tend to be much smaller than men of an equivalent marathon time.  Picture a few male three hour marathoners that you know, and compare them to a few female three hour marathoners.  The women tend to be vastly smaller in terms of body mass and height.  One consequence is that they have much more surface area (i.e. skin area) relative to their body mass.  This is great if it’s hot out, because you can radiate away heat much more effectively.  But when it’s cold, the same effect works against you: your body temperature drops far faster in cold conditions because you lose so much heat.  This same effect may also explain why faster runners were more severely affected: they tend to be smaller than slower runners.

Better late than never right? Hopefully you found this little statistical exercise useful, and best of luck at your next marathon!