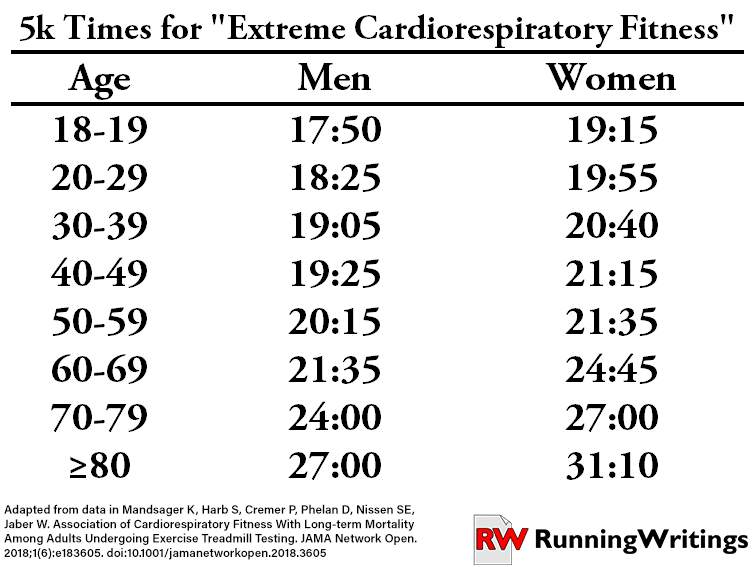 During my PhD studies, I try to keep up with the broader scientific literature on the health effects of vigorous exercise (given that I do study running, after all). Just a few days ago, a fascinating new study caught my eye. It was published in JAMA Network Open by a team of researchers at the Cleveland Clinic in Ohio. The study explored the connection between aerobic fitness and longevity. In other words, do aerobically fit people live longer compared to out-of-shape people?

For the general population, the answer to this question is a definitive yes, based on previous research. The real innovation of this study was that it specifically examined people with extremely high aerobic fitness. People in the top few percentiles of population-level aerobic fitness don’t get there by genetics alone. As any distance runner is well aware, becoming very fit requires a lot of intense and high-volume training. Some cardiologists have hypothesized that this kind of intense training is unhealthy. They point to research showing that biomarkers of heart damage increase after running a marathon, and other work showing a potential “U-shaped curve” for physical activity levels and cardiovascular disease risk.

The actual participants in this study were 122,000 men and women who underwent a standardized treadmill test of aerobic fitness. The treadmill test progressed as most do, starting at an easy walk and gradually increasing both the speed and the incline until the participant could not continue any longer. This final stage of the treadmill test was used to determine the person’s “peak METs,” or peak metabolic equivalent energy output.
The researchers tracked each study participant in the Social Security Death Index, which (for fraud prevention purposes) is a registry of all deaths of Americans who have social security numbers. By monitoring which patients showed up in the death index, and when, the researchers could determine who did and did not die during the course of the study.

As with previous research, the authors of this study found that people with better aerobic fitness, as measured by peak METs, were less likely to die, even after controlling for factors like age, sex, body mass, history of disease, smoking, and other potential confounding variables.
Most interestingly, the researchers found that there was no upper limit to the benefits of physical fitness. The healthiest group of people—in other words, those least likely to die from any cause—were those that the authors classified as having “extreme cardiorespiratory fitness.”
In the context of this study, the authors defined this as scoring in the top 2.3% of all performers for their age and sex. These extremely fit individuals were less likely to die compared to those who scored in the 75th-97.6th percentiles for aerobic fitness, to the tune of a 23% lower risk of death. This pales in comparison to the difference between the most and least fit people, though: Compared to the top 2.3%, those in the lowest 25% of aerobic fitness had five times the risk of death!

Can your 5k time predict your lifespan?

One thing I love doing is trying to translate research findings into something that’s more tangible and practical for people who aren’t clinical researchers. What does it really mean to have a “peak MET two standard deviations above the age and sex mean?”
You may have seen the term “MET” before, at the gym on exercise equipment. It’s a standardized unit of energy expenditure, where 1.0 METs is the energy expenditure of sitting still in a chair.  METs are closely related to another unit of energy expenditure that you might be more familiar with, which is VO2.  One MET is equivalent to 3.5 ml of oxygen per kg of body mass. What this means is that if you know someone’s peak metabolic equivalent, you can easily figure out their VO2 max—all you have to do is multiply by 3.5.  So, it’s pretty easy to turn the cut-points for low, average, high, and elite aerobic fitness in this paper from MET thresholds into VO2 max thresholds.
Once we have VO2max, we’re in more familiar territory for runners. If you’ve read my book, Modern Training and Physiology, you know that your VO2 max is a very important predictor for your race performances. Now, coaches like me usually rail against VO2max as the end-all-be-all of running performance, because VO2 max does not differentiate very well between someone whose 5k PR is 16:00 and someone whose 5k PR is 15:30. That being said, in this case, VO2 max is a pretty useful predictor of running performance, if we are talking about magnitudes like a 30:00 versus a 20:00 5k (or a 30:00 versus a DNF).
You might see where this is going. What I want to do is convert these fairly arcane public health measurements into something that’s understandable for the everyday person. What better way than a 5k time? If we convert the “elite” cutoffs in METs into VO2 max cutoffs, it’s easy to run these through a race time predictor and come up with a goal 5k time for “optimal longevity” (with some very serious caveats!). Let’s take a look at what those elite aerobic fitness cutoffs look like before we talk about the caveats. 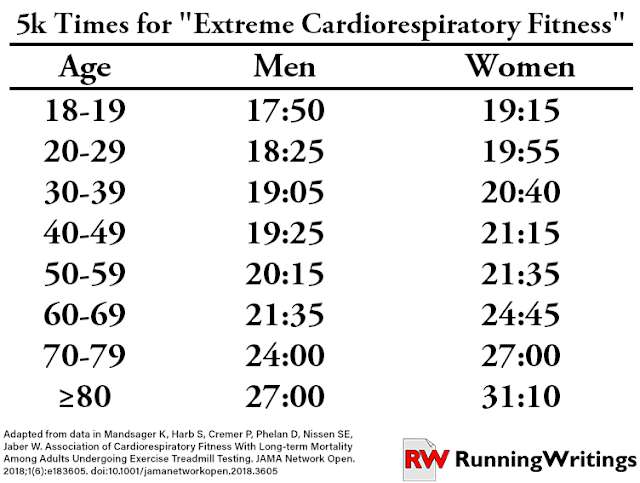 After looking at these times, we can see the disconnect between what’s “elite” at the population level and what’s “elite” for a runner. A 21-year-old male who runs 18:25 for the 5k is certainly in good shape, but he’s still nearly four minutesshy of what he’d need to run to run at Division 3 Nationals in track—much less D2 or D1.
In the context of health and longevity, this is a good thing: even “extreme cardiorespiratory fitness” is well within the reach of many (though certainly not all) people in the general population. One thing I should reiterate is that the longevity benefits of being in the “elite” fitness group are significant even after adjusting for things like smoking, body weight, and other things you might think could account for differences in fitness levels.

As the figure above shows, the biggest differences in longevity are clearly seen when comparing those whose fitness is poor to those who are at least above average, or better.

Not so fast: The caveats

Now, for some caveats. First, my VO2max to 5k time conversion is a tiny bit hand-wavy. Once you get to high levels of running fitness, most of your improvements don’t come from better VO2max; they come from improvements in running economy. That being said, I’m fairly confident that my converted times are in the right ballpark.
The more important caveats have to do with the nature of the causal relationship—or lack thereof—between high aerobic fitness and a long and healthy life. This study measured the fitness levels of healthy people, then followed them to see who died. Being extremely fit appeared to be a good predictor of avoiding death in the future. The key question is what biological mechanism is responsible for this association?
The easiest answer would be doing aerobic exercise. After all, there is a strong case to be made that very few, if any, 29-year-old women are going to be in sub-20 minute 5k shape without doing a good amount of aerobic exercise. But there are plenty of alternative mechanisms that could contribute too. What about genetic variation? Some people are born with a lot of what we call “talent,” the state of being highly aerobically fit even when they do not exercise. These same genetic traits which make someone a talented runner may also be responsible for different biological mechanisms that lead to a longer life: more flexible arteries, resistance to metabolic disease, etc.  Strong aerobic fitness might merely be an indicator of these traits, not the actual cause.
Now, the strongest circumstantial evidence still (in my opinion) supports the causal link between intense, high-volume training and a longer lifespan. At low, moderate, and moderately high doses, aerobic exercise is strongly protective against death. Moreover, alternative explanations, like the hypothetical genetic mechanisms I just laid out, would have to account for the fact that it is extremely rare, on the population level, for someone to reach these levels of “extreme cardiorespiratory fitness” with doing a solid amount of training.How many 45-year-old men are such fine genetic specimens that they can run a sub-20:00 5k fresh off the couch, compared to the number of 45-year-old men in sub-20 5k shape who train hard on a regular basis?

Unanswered questions about fitness and lifespan

When we talk about the potential health effects of training too hard, we aren’t usually talking about a 40-year-old male who runs 19:25 in the 5k. Usually we are talking about ultramarathoners, sub-16 5k runners, Boston Marathon qualifiers, and other people who have a tendency to hammer out hundred-mile weeks and long multi-hour running sessions. If anyone is at risk of health problems from excessive exercise, it would be these extreme outliers. Because of the nature of distributions, you can be sure there are were a lot more 40-year-old men in 19:20 shape in this study than 40-year-old men in 16:20 shape, for example.
While these findings are promising, and suggest that more really is better when it comes to fitness and exercise, there’s still a need for research that focuses on those in the most extreme groups when it comes to exercise volume and intensity.  Fortunately, there is a longitudinal study happening right now on ultramarathoners that’s being run by Stanford University and UC Davis. It might take ten or 20 years before we get solid results from that study, though.
Finally, the question of causality still remains: If you take someone who does not have high aerobic fitness, and train them so they become aerobically fit, will they live longer? This question can only be definitively answered in a randomized controlled trial. Given the difficulty of following people for 20 or 30 years to observe mortality, testing this question directly might be impractical. Instead, it might be possible to correlate changes in aerobic fitness with changes in biological markers that we know are related to longevity—for example, if we hypothesize that lower arterial stiffness is one reason why extremely fit people live longer than those who are not fit, we could conduct a two or five-year clinical trial to see if an intense, high-volume aerobic training program would reduce arterial stiffness, compared to a lower-volume, lower-intensity aerobic training program.
As for me? I’m putting my chips on “better fitness = longer lifespan.” I’m turning 30 this year, so maybe I’ll hit the roads on my birthday, just to make sure I can still crank out a 19:05 5k.